Vertical Epic… Are You Worthy???

Home » Vertical Epic… Are You Worthy??? 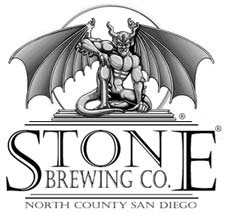 Over the past few years there has been a craze in the brewing world and one of the biggest has come on the behalf of Stone Brewing Co and their Vertical Epic beers. Each year since 02-02-02 Stone Brewing has been putting out a special beer one YEAR, one MONTH and one DAY apart. This will continue until the year 2012. That will 11 beers and some have aged for around 10 years. So if you where one of the lucky ones who actually bought a bottle back on 02-02-02 and that only being 300 cases worth of beer. You are in luck some of those bottles are hitting over $400 dollars for one bottle on eBay.

So what is one to do? For myself since I came to this party in the middle I will have 6 awesome brews when it is all said and done. I will be able to still have a great party and have some friends’ part take in some great brews and a see how they all faired over the years.

Some have wondered what styles have been brewed for these very special brews. I found the info and will share it here.

All Quotes taken from StoneBrewing.com

Vertical Epic 02/02/02 was not brewed “to style”. Instead, we tried to create something new. It’s triple-ish in nature, with wit character, coriander and orange peel, and has way more hops than either a Belgian triple or a Wit would. Belgian yeast was used. Belgian Strong Ale is the closest category that fits — Greg Koch, Stone Brewing CEO

Vertical Epic 03/03/03, we used some pretty interesting ingredients…coriander (a “Belgian-style” beer favorite!), alligator pepper (wow, bite into these little gems and you get a bigtime spicy rush of flavor), and a bit of both unmalted wheat and dark roasted wheat. And a blend of Belgian yeast and American ale yeast. And a nice selection of high alpha hops (a decidedly non-Belgian style twist). All told it makes for a dubble-ish taken-to-San-Diego-pushed-to-the-edge-

Vertical Epic 04/04/04, This time around we used some unmalted wheat, just the right touch of Kaffir Lime Leaf, and a really cool Belgian yeast. The result is a bit like a strong Biere de Garde / Saison-esque influenced beer coupled with some aromatic Bavarian Hefeweizen style phenolic banana esters, and a back note hint of lime from the lime leaf.

Vertical Epic 05/05/05, This time around, we used no spices in the brewing of this beer. If you’ve tasted the beer before reading this, that may surprise you. The special Belgian yeast we used adds a distinctively spicy aroma and flavor. Roastiness, clove, hops, fruitiness, and those other great and funky phenols abound in the nose. What’s in the flavor? You certainly get some dark roasted malts and alcohol overtones. What else? Hints of earthiness, chocolate/cocoa, hop spiciness, maybe even anise, and … the incredible variety of complexities from the classic brewing ingredients of barley malt, hops, yeast and water, when applied with an artistic brewer’s talent never ceases to amaze.

Vertical Epic 07/07/07, In this year’s edition we took our inspiration from two Belgian styles: Saisons and Golden Triples. As such, the Stone 07.07.07 Vertical Epic has a deep, deep golden hue and the flavor is spicy, fruity, complex and refreshing. We used four different malts, and a subtle, yet distinct, blend of Glacier and Crystal hops to get just the right balance. Then, for the 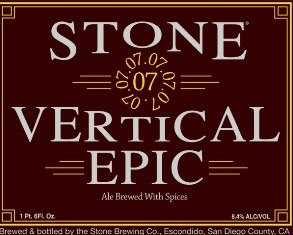 complexity, we added in some exotic spices — including ginger, cardamom, grapefruit peel, lemon peel and orange peel (the latter three acknowledging our Southern California home) — and a special Belgian yeast strain. All in all this is yet another case of us drawing from classic Belgian influences and cavalierly making it our own…San Diego style!

Vertical Epic 08/08/08, The Stone 08.08.08 Vertical Epic Ale is a Strong Golden Belgian style ale highly hopped with American hops (Ahtanum, Amarillo and Simcoe). The beer pours pale golden with a thick and creamy white head of foam. The aroma is full of depth: nuances of pepper, clove, and banana from the Belgian yeast strain, and the resiny citrus notes from the American hops blend together nicely to provide a complex aromatic character. The taste is spicy, hoppy and fruity, with a very dry and a pleasant bitter end. The bitterness lingers nicely, and provides a refreshing finish that leads you to want to drink more and more of this beer!

What do some of you think???