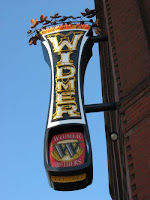 In the 12 years I lived in Portland Oregon I never stopped here. Wow what am I a fool? Guess I never thought I would move away. So on a quick stop after the North American Organic Brewers Festival. I got off MAX Yellow line and walked 1 block and there it was. Right next to the brewery of which I have been to many a time. Had a old brew pub feel the brick walls and the old and new art work it was just what you might 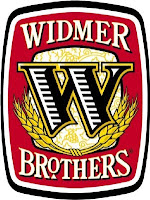 expect. 12 taps going 6 regular beers and 6 off the wall beers that I wish I had time to drink them all. Had a great lunch and the Golden Belgian beer was very nice. This is a great place to stop and one of the quintessential places to hit in Portland. Hell it is as close to the start of Oregon Micro brewing and Portland Beer royalty you can get. To the brothers Kurt and Rob Thank You. The pub has been around a long time the brewery for over 25 years now.