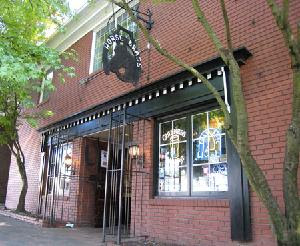 Well I finally made it after 10 years of loving the craft beer scene I made it to the Horse Brass Pub.  I will admit a few years back I went in but the smoke was so thick I walked right back out.  Now if they left the laws as they where I would have one day ventured in but I was sure glad it was not such a smoke house.  Made it nice to really taste and enjoy the brew.  Now enough of that off my soap box.  Don Younger (Owner/founder) whom I have met over the years at various events and places has made quite the place. The taps, the bar the place itself was awesome.  A beer drinker’s paradise I finally made it. The taps available alone where to die for and I was lucky to have a great beer.  Beers in the bottle top notch the food was awesome and the service was also very good. They the servers had great beer knowledge of the product and for this beer geek that was awesome.  If ever in and have a few places to see this is one that is on the top of the list for beer bars.  Horse Brass I will be back…