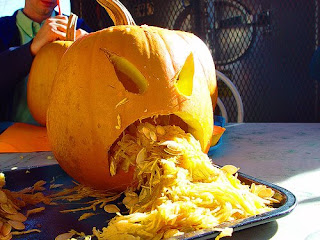 Over the past few years Elysian Brewing Company has been having a very special event. The Great Pumpkin Beer festival or better known as the GPBF. This years GPBF 2008 was no exception. They had some great pumpkin beers and well some no so great pumpkin beers. But all in all we had a great time and will look forward to next year’s event. They have this even over a 10 day period covering 2 weekends and a full week. They utilize all 3 of their pubs and wow it covers such a wide variety of beer it is hard to comprehend. My friend and I attended the Tangletown event. We through for sure the entire pub would be exploding at the seems when we arrived but to our luck we got some great seats at the bar and where able to order the sampler tray right off. 7 pumpkin beers where at the offering and we tired every one of them. Starting with “The Great Gherkin” special Cucumber Chai Pumpkin ale. Yes you read it correctly it had it all. Did I also mention there were orange peel, pepper, ginger and clove added. This was a “Beergasim “if there ever was one. Holy cow better hold on to your taste buds they are going to explode. This beer had so much flavor and added taste when it warmed up more flavors and added spices came out. Wow it was tasty. This was the beer for the night. But not to forget we had 6 other tasters to go. We thought for sure this was going to become a religious experience if all the rest followed the steps of the first glorious beer. 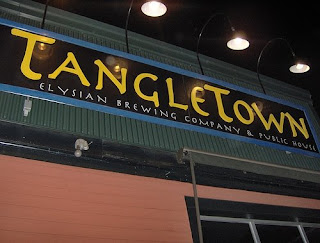 Welcome back to earth my friends. The second beer had no such luck it was bland and tasteless and we where sure disappointed with it. “Hansel and Gretel” An organic pale ale with added Pumpkin. The flavor was a good pale ale but the pumpkin was missing. Next in the list was the PK-47 a Malt liquor style with added pumpkin flavoring and color. Still not living up to the first taster. La Parcela No. 1 was next and with a little more flavoring we where getting some more pumpkin. “Night Owl” the main pumpkin beer brewed by Elysian for the masses had some good flavors and it was like drinking liquid pumpkin pie. Next “The Great Pumpkin” this years ago won awards well this years version was missing the mark. Sorry to say it had some flaws. Good taste with some pumpkin but it did not live up the billing. Last for the night was a dark beer called “Dark ‘O The Moon”, A dark porter style beer with some great flavors of a good dark beer but the pumpkin was missing or masked by the strong coffee and dark malt flavors.

Now do not get me wrong I by no means am a Snob when it comes to beer I love all beer but when it has off flavors or just tastes bad I just can not stand it. We defiantly got some off beers for the night. This could be many different reasons. We are going to blame it on the night and try again next year. We had a great time talked to many people and drank some great Cucumber beer that had Chai and the kitchen sink in it and it was the best. So until next year we bid “The Great Pumpkin Beer Festival” farewell.