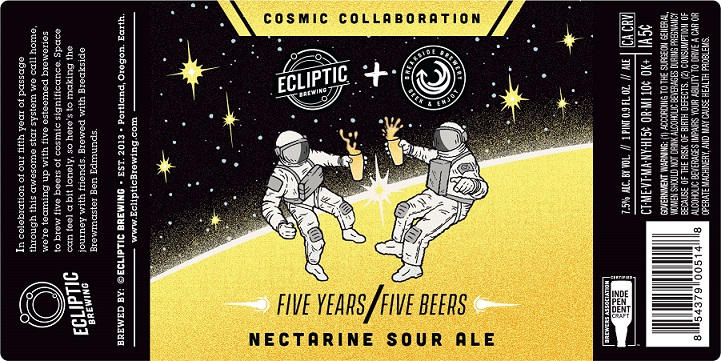 In celebration of Ecliptic’s fifth anniversary, the company is releasing a “5 Years/5 Beers” series, and the collaboration beer with Breakside is third in the launch. Ecliptic Brewing owner and Brewmaster, John Harris, worked with Breakside’s Brewmaster, Ben Edmunds, to create the recipe, and the result is a thirst-quenching beer that will help kick off the summer season. The ale is brewed with pale and Munich malts, wheat and oats, but what provides its unique, fruity flavor is both pureed and fresh nectarines. A touch of coriander and Ecliptic’s house lactobacillus strain add to the classic sour ale flavor profile.

Says Harris, “Ben and I are really stoked to do our first collab. We jumped right on the sour style, and Ben suggested Nectarines. It’s great to have such awesome friends in the craft beer industry”.

A Cosmic Beer Dinner with Harris and Edmunds for the release of the Nectarine Sour Ale is planned at Ecliptic’s Restaurant on June 19 at 6 p.m. Attendees will enjoy three courses, plus appetizers, from Ecliptic Brewing Chef Michael Molitor, along with sour beer pairings from each of the breweries and signed bottles of the collaboration to take home. Tickets are available to purchase here for $50. The Nectarine Sour Ale will also be released in both draft and 500ml bottles throughout Ecliptic Brewing’s distribution network.