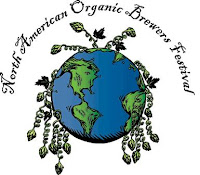 HOT HOT HOT… That is the answer for the question what is the North American Organic Brewers Festival? Hot weather, hot beer (awesome beers get it while it is hot – you get the meaning) and just plain hot. The only decent shade was the old oak tree on the west side of the park. You had about 1,000 people roaming the beer tents getting there samples or full cups and then they all sought refuge under the giant tree. It was like a herd of wildebeests seeking refuge from the Serengeti sun. Are we in Portland Oregon? 95 degrees not sure, beer festival yep we are in Portland. Up on a bluff overlooking the Willamette River – Overlook Park filled with organic beer drinking geeks. We found that green was in and so was the sun. Breaking records for the month of June in Portland 95 degrees was hot. The Organic Brewers festival was going to be low on shade and ice. 30-35 brewers represented with well over 75 different beers to try. There was plenty to sample. Do you like Stouts not on a hot day but even they where tasty. Give me a good ole IPA for the day. There where beers from England there and as close as ½ mile away from Widmer Brewing. You would find beers filled with great water, specialty grains and hops and all fresh and organic. Some beers even went as far as to not have any actual wheat grains and go for the Sorghum beers. These are beers free of wheat based products for those with allergies. 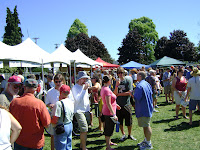 I had a good amount of samples on this day. I tried some Stouts, IPA’s, Ambers, Wheat ales and few Fruit beers. The best for me this event was the New Old Lompoc from Portland Oregon – Flowers of the Gods IPA.

This is a great festival to attend. Not like the huge overcrowded beer events it does not have the tens of thousands in lines waiting. It is a beer geeks delight with the real beer drinkers there t enjoy good brew. It is fairly new event and gaining popularity each year. This being the 4rd year this is fast becoming a must attend. Even the 100% recyclable event cups where a nice addition. This leaves me with one question will the cup fall apart as I am drinking or how long before this corn starch cup will fall apart. Well good thing to know I made the whole event without spilling a single drop. For more information about his event see their website and we will see you there next year. http://www.naobf.org/